This gem of a church is like a mini version of Guildford Cathedral.  Grade II* listed, it is in West London near the start of the M4 motorway. Faced with brown engineering brick – reputedly from Wales – it is again in a simplified Gothic style, with strong Arts and Crafts influence. Made from reinforced concrete – a new building material at the time – it was rendered on the inside with acoustic plaster which was discovered to contain asbestos, and so recently replaced at great cost.
The east end contains a Victorian reredos behind the altar which was removed from St Thomas’s Portman square, the demolition of which paid for this church. You can see up in the window at the East End the tracery is formed from the back of the Calvary – crucifixion scene – carved by Eric Gill.  Carved from a single piece of Portland Stone, he made it – as he usually did – in situ standing on scaffolding. The other sculptor whose work is throughout the church is Vernon Hill.  He did the carving over the north door of a dove. 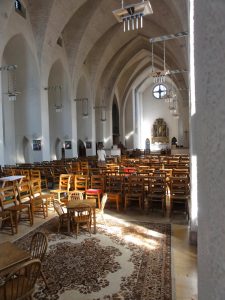 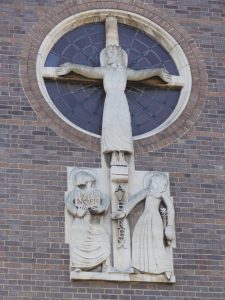 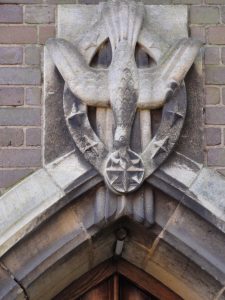 Like St Saviour’s Old Oak Road, Acton this was built for the Royal Association in Aid of the Deaf and Dumb.  Now used by the Roman Catholics, this was Maufe’s first church.  It is a simpler church than St Thomas’s above, but with a fine roof.

In 1937 Edward Maufe was asked to extend Morley College’s Victorian buildings.  The College is a further education college in south London.  The Victorian buildings were bombed, and were replaced with buildings that pay homage to the Maufe extension.  Here is Maufe’s original proposed 2-storey design and how it looks today. 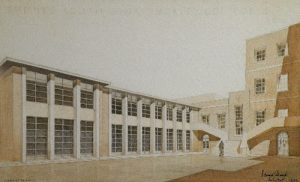 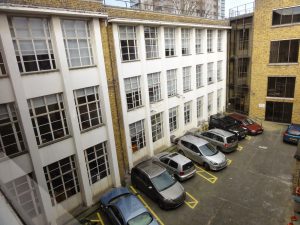