Originally laid out by the brothers Robert and James Adam in the 1770s for the Duke of Portland, notable architects have continued to contribute to the Portland Place’s architectural potency. Amongst the Georgian terraces stand out George Val Myer & Raymond McGrath’s BBC Broadcasting House, George Grey Wornum’s RIBA and J.Stanley Beard & Walter Bennett’s 53-57 Portland Place apartments.

John Stanley Beard was the founder and for many years senior partner at the firm J.Stanley & Clare, London. He specialised in the design of theatres, music halls and cinemas and designed the Gerrards Cross Picture Playhouse in 1925. In the early 1930’s Walter Robert Francis Bennett graduated from Architecture at Portsmouth College of Art and joined J. Stanley & Clare as partner, the practice subsequently became J. Stanley Beard & Bennett and Partners. Beard and Bennett’s 53-57 Portland Place was bold and modern inter-war redevelopment, a breathe of fresh air juxtapositioned against the what promotional materials in the thirties called ‘old period houses’. The apartments were built as luxury dwellings with ‘central heating and constant hot water’. The larger more expensive apartments that were intended for medical men were given separate entrances (53 and 57) either side of the main door. The communal facilities included a tennis court in the basement. Beard and Bennett had designed the apartment building Gunnerbury Court in South Acton earlier in the thirties but where as they are brick and residential 53-57 Portland Place are more grand and theatrical, the stunning façade and entrance more similar to one of their art deco styled entertainment venues. 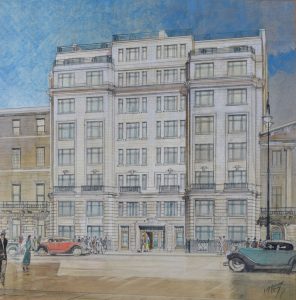 Unrivalled as an architectural perspectivist it is no surprise that Beard & Bennett commissioned J.D.M Harvey  a trained architect to draw the perspective drawings for 53-57 Portland Place, it perhaps even featured in promotional materials at the time, the entrance reception or the property sales boardroom.

“The architectural draughtsman who is equally competent at drawing such incidentals [as landscape and figures] is as rare as the landscape or figure painter who is equally competent at architecture. Harvey was one of those rare men. He would draw a building with a slightly freer hand than an architect would, and his landscape in a slightly more architectural manner than that of a painter.” Perspective in Perspective, Lawrence Wright (Routledge 1983) p234. This watercolour of 53-57 Portland Place is just as much about the elegant building as the stylish cars, well dressed people and sophisticated London street.

Harvey was born in Newfoundland, where his father was a railway engineer, and came to England aged 17, studying at St Paul’s School, London and at the School of Architecture, University College London 1914-1918, being awarded the Donaldson medal. In 1920 he went into practice on his own, designing several interiors with J A Bowden. Amongst his works were the reconstruction and interior decoration of 4 Cleveland Place, London (1936-37), and a house – including all furnishings – in Herne Hill for Dr M I Elliot (1938). After 1944 he primarily worked as a perspective artist and illustrator, a role to which he was particularly well suited.

During the war he was a member of St Paul’s Watch, a group of over one hundred architects and surveyors and artists who kept watch over St Paul’s Cathedral during the blitz, extinguishing fires and helping St Paul’s to survive the war virtually unscathed. The Watch was described as the ‘Best dining club in London’ on account of its influential members. He retired to Italy, living on the shore of Lake Como, and enjoying the local red wine.