In one of the London’s most sought after postcodes Princes Court is a bold and elegant structure that complements its grand neighbours. Built opposite Harrods, on Knightsbridge, the apartment block was always going to be a popular and exclusive place to live.

The apartment block was designed by George Valentine Myer (1883-1959), a skilled architect well known for his impressive design skills. His early career was spent designing houses in Essex, soon after he was employed on important London commissions, including the design of Asia House in Lime Street (1912–13) and Portsoken House in the Minories (1927–28). 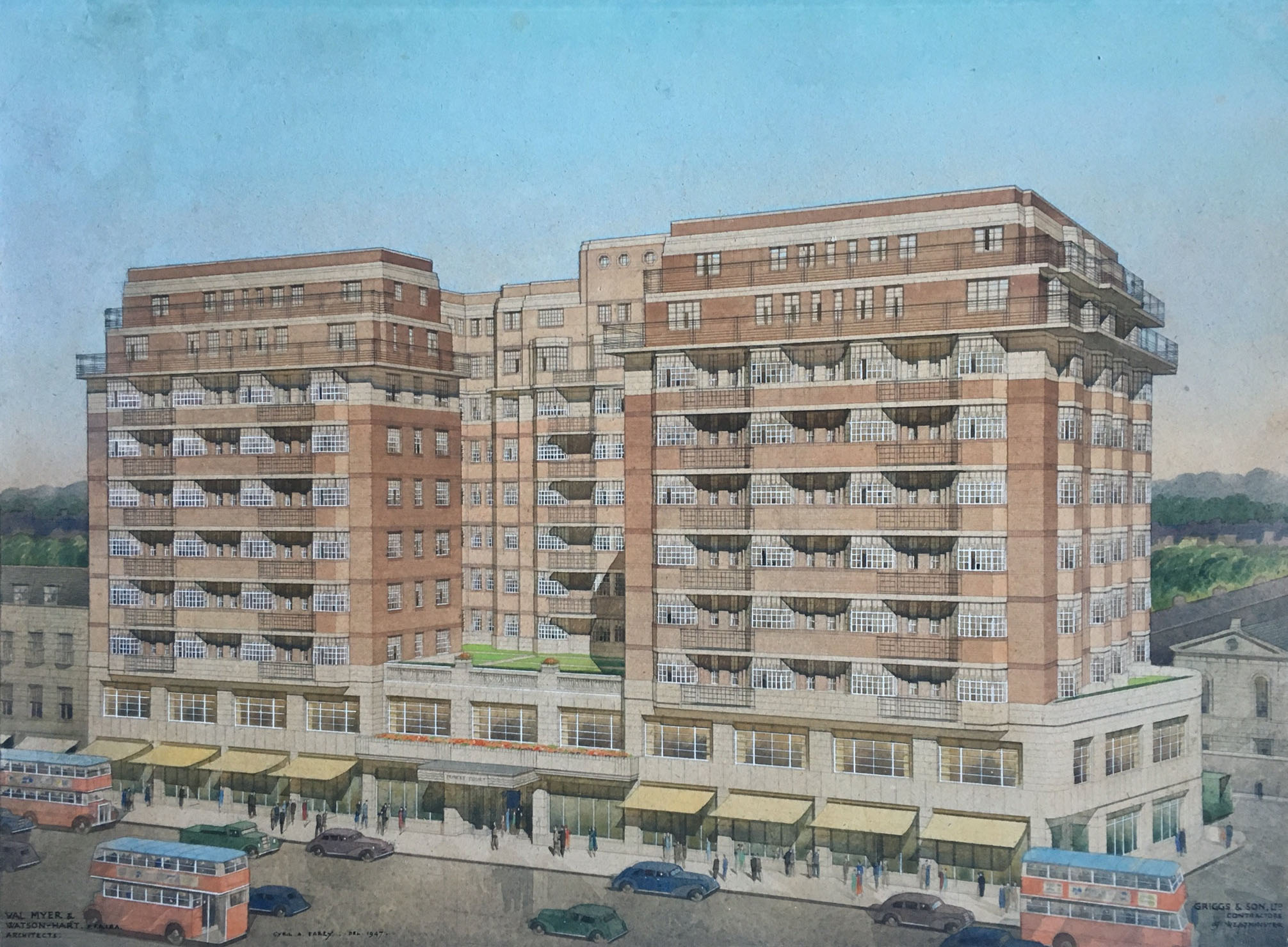 He entered into partnership with F J Watson-Hart; in 1927 they were working for a consortium that owned the site at Langham Place off Portland Place that the BBC was acquiring for their new Broadcasting House. Myer’s experience at office buildings stood him in good stead, and he designed a splendid modernistic building for them. Frequently compared with 1930s ocean liners, its clean lines alluded to New York Art Deco. Yet in using Portland stone it fits in well with the traditional buildings of Regent Street, All Souls Langham Place, and Portland Place.

It is no surprise that the work of the partnership of Myer and Watson-Hart progressed quickly, combining both the grandeur of the office design and modern domestic design to produce some of London’s best apartment blocks. Prior to Princes Court, Myer was involved in the reconstruction of Park Lane for the Grosvenor Estate. Works there included Aldford House (1930–2) was a modernistic apartment block with classical decorative schemes by Sir Edwin Lutyens that replaced a late-Victorian Jacobean-style mansion, and Fountain House (1935–38) which was built under the design guidance of Sir Giles Gilbert Scott.

Not afraid to use the latest modern construction methods, Myer and Watson-Hart demolished the houses between 78 and 94 Brompton Road to build Princes Court – Knight’s Court as it was originally known – a large block of steel- framed apartments, and the first building on this scale. The shops on the ground floor included one – at 78 – designed for Cresta Silks by fashionable architect-designer Wells Coates (1895 – 1958) who was the architect of the Isokon apartment building (of which J M Richards the architectural critic said he had produced a better design than Corbusier ever did).

With such a remarkable architectural pedigree it is no surprise that Myer and his firm commissioned the equally talented Cyril Farey (1888-1954) to capture Princes Court at its prime. As an architect and architectural illustrator, Farey forged an illustrious career rendering incredible buildings into extraordinary works of art. The resulting watercolour is not merely an architectural drawing, it is expressing a lifestyle that only an apartment in Princes Court can provide. As such the fashionable and modern apartment block is surrounded by a Mediterranean blue sky and Hyde Park peaks out from the sides as an Eden of lush green. The smart street is punctuated by smart friendly yellow awnings whilst classic stylish cars and iconic London buses pass by.

Popularly acclaimed as the greatest architectural draftsman of his age and indeed possibly of the twentieth century, Cyril Farey observed of his clients that rather than the building, “It’s the trees and buses they pay for.” Wanting a fine picture to hang afterwards in the boardroom, or a picture that would render the most dull of architecture an improvement to its surroundings, a commissioning architect would call for Farey’s services. Aware of his ability to turn the mundane into the spectacular, he noted that the architecture should nonetheless be accurate with the impressionistic rendering applied only to the trees, people and landscape. 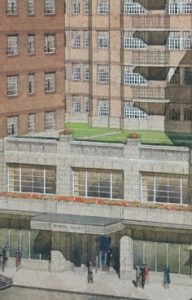 Born in London in 1888, Farey was at prep school at St Aubyns, East Sussex. He trained as an architect at the Architectural Association, being awarded a travelling scholarship in 1909. Farey ran a successful architect’s practice, latterly with his associate Adams, but was – and is – far more famous for producing splendid drawings for the works of other architects, many of which were exhibited at the Royal Academy. Indeed so many of his works were exhibited there that the RA architecture rooms became known as ‘Fareyland’. Lutyens when entering the room once exclaimed “What ho the Farey Glen.” A distinctive feature of many of his pictures is the reflections in the foreground, as though following recent rain. His favoured method was to use rough Whatman paper, sketching first with pencil, and then carefully controlling the fall of the light, so as to place the shadows with great accuracy; the product of the sunny spring and summer days he favoured to illustrate his buildings. A small drawing took a couple of days, a large one such as this might take as much as three weeks to complete.

Provenance: Sotheby’s London 27 April 1988 lot no 585; private collection, UK. Here, having not been seen in public for thirty years is the long-forgotten design for the block of apartments available to purchase.