The Telecinema was built for the 1951 Festival of Britain, situated between Waterloo Station and the Royal Festival Hall. Whilst press releases referred to the Telecinema, the outside of the building proclaimed Telekinema. Wells Coates were the architect, creating – in the words of Today’s Cinema – “A fly-away linear design [with a ] gay façade and bold modern stare”. Seating 410 people it was the first cinema in Britain with both 3D sound – provided by an array of speakers behind the screen and allowing the sound to come from the direction of the person speaking – and 3D vision.

It was demolished in 1957 when the National Film Theatre moved to its current location – renamed in 2007 as BFI Southbank. 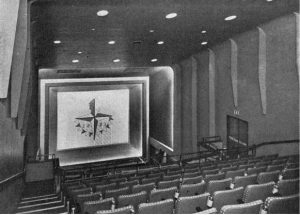 The interior of the Telecinema