A thousand items in stock, something for everybody

WE LEAD BY EXAMPLE

These are a few of our favourite things, currently. They can be shipped to you, wrapped up in brown paper and tied up with string, with no further charge within the UK.

An instantly-recognisable brand today, this poster was reserved for use in the event of the German invasion. Once it became obvious that the Germans were not going to invade, these posters were sent back for recycling. As they were never used, the survivors are incredibly rare.

In 1939, with invasion an ever-present threat, HM Government commissioned three posters with snippets designed to encourage the population. Bearing a crown at the top, they were clearly intended to communicate a message from the King. In the event the poster campaign was not a great success, with the people regarding it as an instruction from the powers-that-be that it was the people, not the leaders, who were going to be the ones doing the hard work. The Keep Calm posters were therefore never used. Owing to the shortage of raw materials, the paper was recycled and only a few survived.

In 1954 Frost moved to Leeds to become Gregory Fellow at the University. This began a period when he painted yellow and black and white paintings, inspired by the Yorkshire landscape. In 1958 he joined the London group and then moved to St Ives. This painting dates to this era. 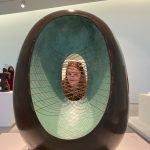 We are delighted to announce that Annabelle Fuller has recently joined the Manning Fine Art Team. Educated at Magdalen College Oxford and The Courtauld she brings her wealth of experience to us, and we are most flattered that she has joined us rather than having continued with her glittering acting career, most recently having starred in The Crown.  Here she is pictured with Stringed Form by Barbara Hepworth at The Hepworth in Wakefield.

She is most emphatically not for sale.

Our views of Oxford and Cambridge are firm favourites with alumni, dons and parents.

Modern British Art is inspired by the British landscape, the weather, the people.

Vintage posters have been used for over a hundred years to sell products and concepts to the public. Now they sell themselves.

It may be too late for Father Christmas to load these onto his sleigh to reach you for Christmas, but it's never too late to buy yourself a Christmas present if nobody gave you the thing you needed above all other!

We are next exhibiting at Connect – The Independent Art Fair, The Mall Galleries, at its next showing, with luck during 2021 but subject to Covid.

Manning Fine Art is a co-organiser of Connect – The Independent Art Fair.

We are open for viewing by appointment in London SE1, between Borough and Elephant & Castle tube stations. Do feel free to give us a call or drop an email to arrange a visit.