To celebrate the centenary of Sir Terry Frost (1915–2003), the TATE and Leeds Art Gallery have collaborated to bring together a selection of the artist’s most significant artworks. The exhibition charts Frost’s work in St Ives, California and Leeds. This article selects artworks from the stock of Manning Fine Art and the exhibition which illustrate Frost’s exciting and varied work.

In the exhibition Walking Down the Quays, St Ives (1954) introduces the viewer to the Cornish coast, its tidal movements, and more importantly the bright colours and nautical motifs such as the crescent boats which will become so iconic to Frost’s work. However, it is the painting Walk Along the Quay and others in the series which really expand and develop Frost’s abstract landscapes. The series include tall, thin canvases with the same motifs of harbour walls and crescent boats but with a dynamic moving energy that Frost puts down to his experience of walking along the quay with his young son. The viewer experiences this journey as one’s eyes enter the painting and stroll along, revealing the scene, picking out walls and boats, each merging into another and drawing you along the quay.

However, this sudden focus on Frost’s British abstractism and the popular and prolific St Ives scene fails to inform one about Frost’s artistic coming of age. Unlike other St Ives artists, Frost was a latecomer to the art world. During service in WWII he was taken prisoner in 1941, here fellow inmate and artist Adrian Heath taught him to paint. Returning to England, Frost followed Heath’s advice and commenced study with Leonard Fuller in St Ives, then using his ex-serviceman’s grant to attend Camberwell School of Art, London between 1947-50 whilst settling in St Ives and commuting between both.

The exhibition opens with Frost’s work in St Ives during the 1950’s. As part of a close circle of emerging British modernists in St Ives, Frost found himself immersed in British abstractism and thrust into the limelight that established artists Barbara Hepworth and Ben Nicholson brought to St Ives. Frost’s St Ives days form a distinct, modern and formative period in his art works where like Hepworth and Nicholson he develops a landscape-inspired abstracts. 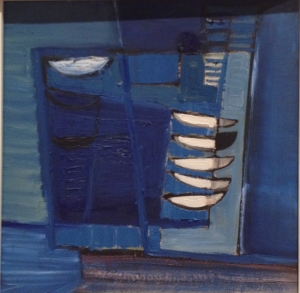 Manning Fine Art’s Still Life with Blue Vase (1946) is an early painting from this period of tutoring where Frost was going through the statuary life drawing classes and still life exercises. One imagines it as a study, experimenting in composition, perspective and tone. Yet in this tutored work, Frost’s signature confident brushstrokes and bold colours are evident, and the striking blue vase and orange form are so indicative of what Frost would produce later. His obvious talent, combined with his dedication to his studies and the supportive environment in which he found himself meant Frost quickly flourished. 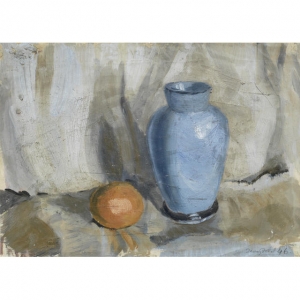 Frost’s recognition in Cornwall led to his move to the University of Leeds in 1954 as Gregory Fellow and later to Leeds College of Art. As in St Ives, the Yorkshire landscape would play a large influence in Frost’s work. Manning Fine Art’s Yellow Landscape with Naturalistic Forms bears a strong resemblance to two works in the exhibition: Yellow (1955) and High Yellow, Yorkshire (1955) and almost certainly dates from the early to mid 1950s. Similar to the St Ives Walk Along the Quay, these works resemble a walk through a landscape. The patchworks of crosshatching resemble fields, these are overlaid with the rolling Dales and interspersed with spiral plant life. Indeed, during his time in Yorkshire Frost spent considerable time in the country and when teaching explored various academic writings. Certainly the biologist D’Arcy Thompson’s writings about organic structures influenced Frost’s artistic expression, particularly in the naturally occurring designs such as spirals and organic growth patterns. 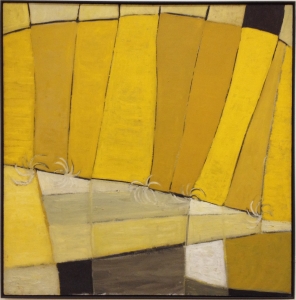 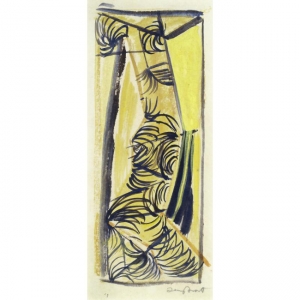 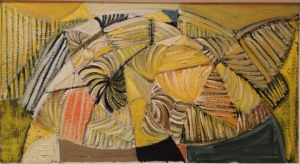 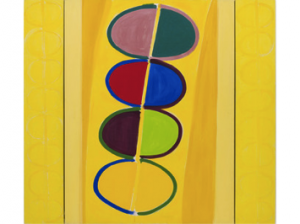 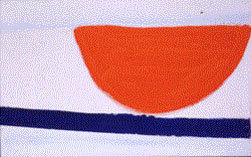