Original Keep Calm and Carry On Poster for sale

Keep Calm and Carry On at Art and Antiques Olympia 2016

The story of the poster is well known these days, but bears repeating. In 1939, with invasion an ever-present threat, HM Government commissioned three posters with snippets designed to encourage the population. Bearing a crown at the top, it was clearly intended to be a message from the King: “Your Courage, Your Cheerfulness, Your Resolution, Will Bring Us Victory” was displayed widely, with hundreds of thousands being printed; similarly “Freedom is in Peril Defend it with all Your Might.” The third poster – “Keep Calm and Carry On” – was distributed, but was to be held back and only used in the event of invasion.

In the event the poster campaign was not a great success, with the people regarding it as an instruction from the powers-that-be that it was the people, not the leaders, who were going to be the ones doing the hard work. As the invasion never happened, Hitler’s armies being otherwise occupied elsewhere in the world, and the Spitfire achieving victory in the Battle of Britain, the Keep Calm posters were never used. Owing to the shortage of raw materials, the paper was recycled and there the story should have ended.

However, in 2000, the owner of Barter Books in Alnwick discovered a copy of the poster in the bottom of a box of books. They hung it up in their shop and started producing reproductions, and the poster has become an internationally recognised image, reproduced on mugs, t-shirts, and adapted into such uplifting slogans as “Keep Calm and Drink Tea”.

We are delighted to have acquired one of the handful of posters that remains, and are offering this for sale at the Works on Paper Fair, together with inter alia some further interesting World War II posters, starting at £125.

Manning Fine Art is an art dealer based in London dealing online at manningfineart.co.uk and exhibiting at Olympia 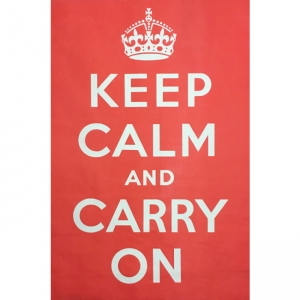