The St Pancras Hotel allows tours of their fine building. For £20 you get one and a half hours (or a little more) of a Blue Badge guide. Our guide to this glorious hotel was a fan of Victorian architecture, and had a myriad of anecdotes for us.
Arguably London’s best-known piece of Victorian architecture, it was built as the railway hotel for St Pancras station which served as the London terminus for the Midland Railway.  The station’s architect was William Barlow and he designed the widest single-span roof in the world.  Seeking a suitably grand hotel to match it, the Midland Railway chose George Gilbert Scott who designed a hotel far grander than they had ever imagined.
The famous staircase which is painted as it was about 1900 – in red with fleur de lys.  As the decoration scheme was so famous thanks to its use in films – such as the Spice Girls’ “Wannabe” – it was retained. The carpet was woven by Axminster according to the original design which they still had in their records.  It was however so bright against the red walls that Axminster wove a grey thread into it, in order to tone it down.
Scott designed the hotel to showcase the products of the Midlands, hence the tens of millions of red bricks that were used to face it; the Minton tiles (from Stoke on Trent) in the corridors; the fourteen different types of Derbyshire granite and limestone that are used to decorate it – polished it has the air of marble and comes in a range of colours; and the wrought iron made by Francis Skidmore of Coventry. 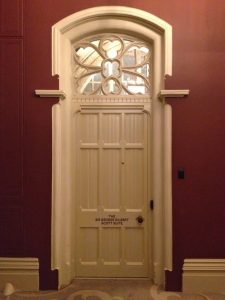 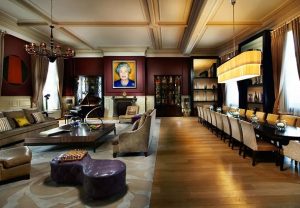 Built to the highest standards of the time, it had hydraulic lifts, fireproof concrete floors and five baths for its two hundred rooms.  Needless to say, by the 1930s it was regarded as having far too few baths, the concrete floors precluded modernisation by the installation of plumbing, and the hotel was closed and somewhat unsympathetically turned into offices for British Rail. It narrowly escaped demolition in the 1960s, thanks to campaigning by John Betjeman, and by the 1980s it was no use even for offices – failing fire inspections.

Happily it was rescued, the top two floors being turned into apartments, and the rest of it returned to its original function of being a hotel. If you fancy staying in this Gothic fantasy palace you can book the Royal Suite and invite nineteen of your closest friends to join you for dinner in it.

The rooms in the Scott part of the hotel are branded “Chambers Suites.”  The “Barlow wing” was newly built last decade You can see over to Kings Cross station next door, which now looks extremely fine now you can see the front for the first time in a century or so.

No tour of course is complete without a ghost story or two, and this is no exception.  The notable death in the hotel was of the architect’s son George Gilbert Scott junior.  An architect himself, he never reached the levels of fame of his father, and whilst resident at the St Pancras took his own life – having become an alcoholic and spent time in an asylum.